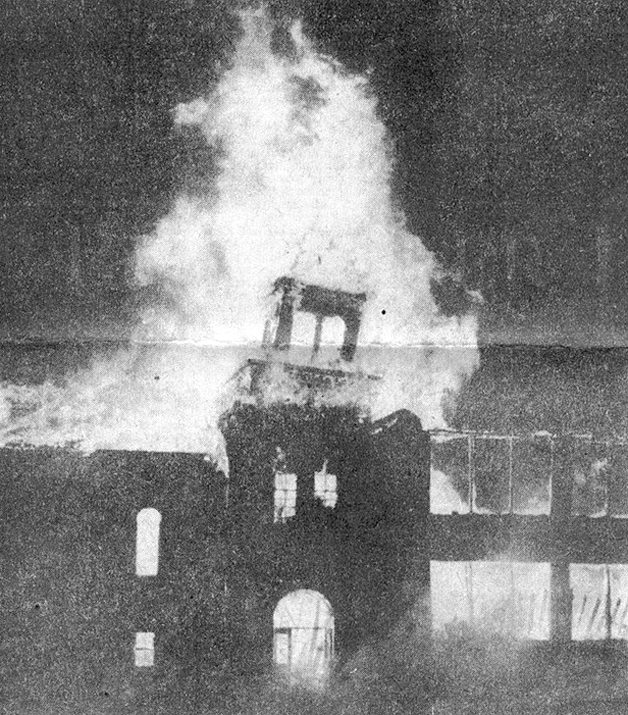 The bell tower is consumed by flames at the Mazeppa Elementary
​ School on December 26, 1975. Photo by the Post-Bulletin, Rochester
By Mike Holtorf


MAZEPPA – Forty years have passed since Mazeppa lost its elementary school to a horrendous fire. Standing on “school house hill” for almost 80 years, and educating grades 1-12 until 1958 when grades 7-12 went to the new adjoining high school, the Mazeppa learning institution that helped shape so many young lives went up in flames on a rather mild winter’s evening of December 26, 1975.

It was one of the worst fires in Mazeppa’s history. Maybe only exceeded by the fire of January 28, 1891, which destroyed the huge Mazeppa Mill Company and elevator. That fire rekindled two days later and, as a result, burned many places of business.

The elementary school fire was reported at about 7 p.m. Friday, the day after Christmas, by Joe Liffrig and his sister Lori. Starting in the kindergarten area in the basement, the fire rapidly consumed the wood interior of the structure well beyond saving as fireman arrived. Assistance was needed from the Zumbrota and Zumbro Falls Fire Departments. Fireman Bob Beniak rushed to close the fire doors, denying the flames access into the gymnasium (built in 1940) and the adjoining newer high school.

During the fire, another fire call came in reporting a fire at the Howard Hofschulte residents three blocks away. After scrambling for additional equipment to respond, the fire department discovered that the person reporting the fire had only witnessed a reflection of the school blaze in a window at the Hofschulte house.

One injury did occur during the hurried first few minutes after firemen arrived. John VanDeWalker, then a 16-year veteran of the Mazeppa Fire Department, dislocated his right shoulder as he attempted to place a fire hose through a basement window. He fell into the window well and had to be pulled out by fellow fireman. Coincidentally, he had suffered an injury to his wrist at a fire on the same date eight years prior.

People of all ages gathered in the park across the street to witness the spectacle. Some assisted if they were able. Some stood on the skating rink across the street as the ice melted from the extreme heat. A blast of glass and fire shot out of the west upper story windows, hurtling glass fragments to the street. Most onlookers stood silently watching the blaze. Tears flowed from the eyes of many. A unified gasp went up among the crowd as the bell tower began to lean and then slowly crashed into the inferno. The bell was later recovered in the ruins, and it now silently stands watch, along with the cornerstone near the entrance of the current middle school. Firemen were on the scene throughout the night, and the ruins were still smoldering the next morning. All that remained were partial sections of the walls, along with the chimney and the memories that we, 45 years and older, still carry with us.
The state fire marshal determined that the most likely cause of the blaze was an overheated ballast in a fluorescent light that had been left on over the holidays. Loss was approximately $600,000.

Memories of the fire

Mazeppa residents shared some of their memories of the school fire:
Dale Amy: “As we watched the fire raging from inside our house in the front entryway we could feel the heat radiating through the windows. As the fire grew taller and hotter, we were hoping and praying that Dad, a volunteer fireman, was safe.”
Misty Gruhlke Biers: “I was upset about the fire. I had just received ‘Little House in the Big Woods’ by Laura Ingalls Wilder, through a book order. I left it in my desk over the Christmas break to read at school. I received a copy of that book last year for Christmas as a gift from a close friend. She had remembered my loss from so long ago. I appreciated her thoughtfulness. I did enjoy the longer break from school.”
Tracy Timm: “Longer Christmas vacation! Lost a signed Harlem Globetrotters basketball in that fire. My dad was not pleased that I took it to school.”
Christine Olson Heitman: “I remember feeling very scared and sad. I loved school! We did get one of the bricks from the rubble sometime later but have no idea if it’s still at my mom’s house or not.”
Janet Sibley: “We were home. Shane was in first grade. All were thankful it wasn’t a school day! All he kept saying was his new tennis shoes burned up!”
Heather Frank Hentz: “I also was up at the park watching while my date [now my husband] for the night was helping put the fire out.”
Mike Hammes: “My first year on the fire department. I still have the signal light lenses from one of the trucks. They needed to be replaced due to being melted from the intense heat.”

The community’s response to the situation

Although some students such as Tom Stahman thought, “great, no more school,” that wasn’t the case. The school board immediately went to work discussing options.
One option was to bus some or all of the students to other towns. Parents’ opinion were pretty much unanimous in wanting to keep them in Mazeppa.
Alterative locations within the village were chosen. Christmas vacation was extended one week to allow more time to adjust. The new addition to the old creamery building being built for use as the fire hall would be used for the first and second grade. The creamery building itself would serve as the elementary office. Due to that facility not being ready for occupancy, those grades were crowded into the study hall room at the high school for one week. The Lutheran church basement served as a classroom for third and fourth grades. The Saints Peter and Paul Catholic Church hall was the classroom for fifth and sixth grades. Tom Stahman, then in second grade, remembers being given the duty of crossing patrol and carrying a large flag when it was time for the two-block walk back to the high school lunch room for the noon meal. A weekly trip to Mrs. Hellerud’s library also allowed for a little exercise.
Classes were held at these locations for the remainder of the 1975-76 school year and all of the 1976-77 year until the last week before summer break when they were moved to the newly built school.

History of the school

With education opportunities being a priority of the early settlers of Mazeppa, the predecessor of this 1896 structure was built in 1858 for $800, with the lumber provided and donated by J.A. Martin from his sawmill in the village. That original structure served for 36 years, but due to overcrowding, there was need of a larger and more modern schoolhouse.
Some citizens had lobbied for years of the need for a city hall. But citizens in early May of 1896 voted for a new school building as their priority. Ground was broken later that month.
Charles Grover of Zumbrota submitted plans. Cost was estimated at $6,000 with brick an additional $1,500. The final finished cost was approximately $10,000.
Construction progressed quickly, with brickwork and roof completed in August. A minor delay in the arrival of the numerous windows slowed that part of the construction. Those who called for the city hall were to get their wish also, as the old schoolhouse had been moved, intact to the middle of the street, later to be pulled one block west. It continued its service to the town as the city hall.
The school year began with classes still held in the old school setting in the street. On October 30, 1896, the old school building was formally abandoned and the new one was put into use. Enrollment increased, as families from outside the district found a way for their high school age children to take advantage of the new facility and expanded curriculum that was now offered in Mazeppa. A quote from the school board said, “No tuition fee will be charged to non-resident pupils coming to the high school at this place, but those attending the grammar department will be charged $1.50 per month, and $1.00 per month for intermediate and primary departments.”
The basement floor was finished in October of 1899, in the area that was to be used as a gymnasium. In 1912, expansion was again needed and an addition was made to the east side of the building, increasing the school size by about one-third. A problem of not enough natural light in some of the rooms was alleviated by installing much larger and more numerous windows, especially to the south. The Work Project Administration (WPA) added the present-day small gymnasium in 1940.

My memories of the school

How can we forget the smell of the varnished, waxed, and polished hardwood floors?  How they (especially the stairways) creaked as we walked. The heavy smell of wet coats, hats, and boots in the cloak room from their owners spending recess on the playground. The gloves and mittens roasting on top the radiator. Their owners hoping for them to be dry for the bus ride or walk home after school.
How can you forget taking a whiff of the fresh ink from the mimeograph machine as the teacher handed out that test paper or artwork to color. The trip to the boys lavatory downstairs and saying hi to Percy Wobshall and Hub Schafer sitting on an old couch or chair in the boiler room, obviously planning where, how, and when to tackle their next task. Their Monday morning visit to the office to purchase a lunch ticket from Frances Stoddard or to give her the money for afternoon milk break.
All of us are sure to remember at least one of the many teachers of our day. That respected individual who more or less took over the parental role during the day. Many fine teachers graced those rooms throughout the years. Oh, the memories are so numerous. Most were good.
​ 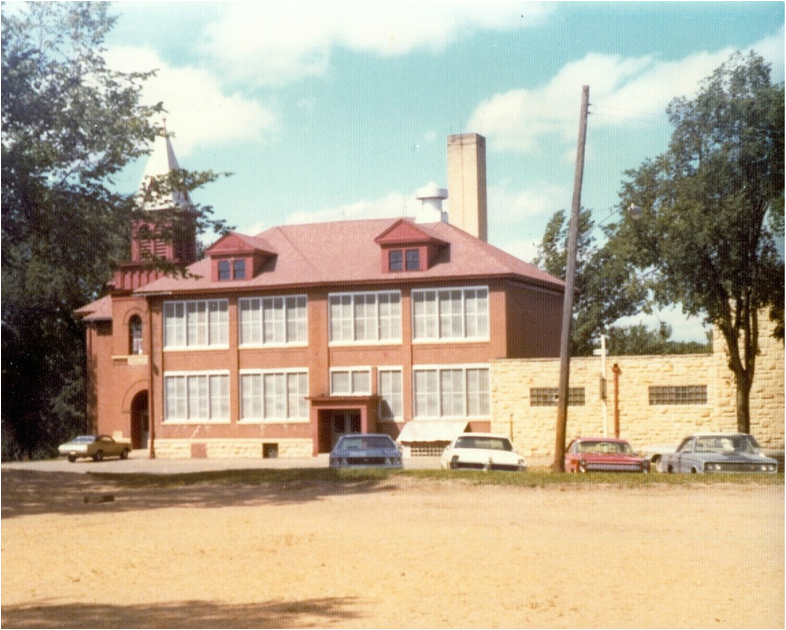 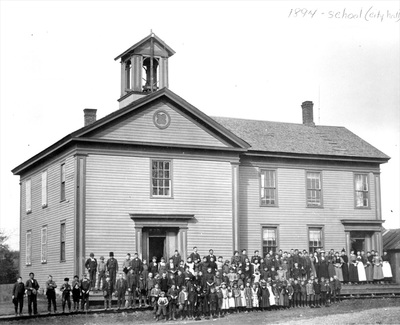 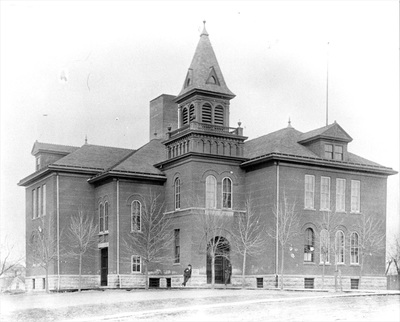 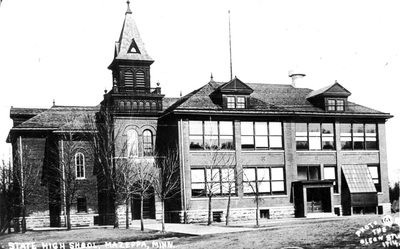 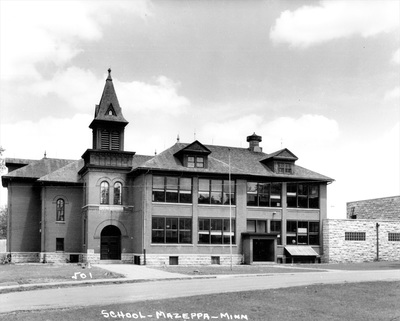 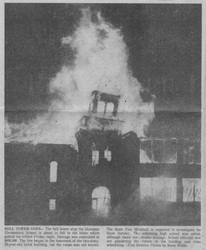 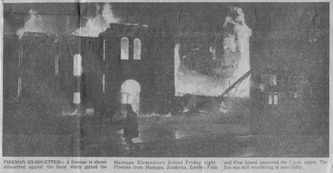 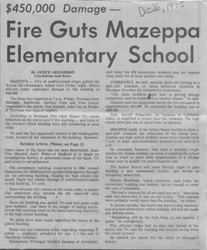 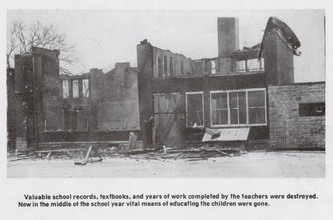 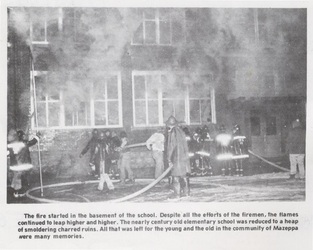 Zumbrota-Mazeppa School in 2009
The school merged with Zumbrota in the fall of 1987.
1987 was the last graduating class of Mazeppa High School.