In Uncle Cal Buck's Lenten devotional, he recounts his fear during the Korean War and a call to knock out an enemy machine nest.  For his courageous action, Sergeant Calvin Buck received the Silver Star Medal, the third highest military decoration for valor.  He sees his miraculous survival as a call to a life-long commitment to his Christian Faith.
Lenten Devotional
Saturday, April 19, 2014 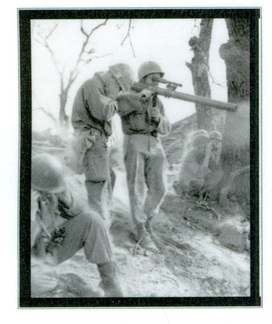 Day Forty
Cal Buck
In Deuteronomy 31:6 prior to Moses' death, he told Joshua to be strong and courageous. "Do not be afraid or terrified because of them, for the Lord your God goes with you." Then why should we be afraid or have fear? He is always with us. He looks over us and guards us.
There were many times in my combat experiences that I
was fearful. On October 19, 1951 around 3:00am, we were told we would be taking Hill 443. We had to cross a small river, which was waist deep. We laid on the river bank for some time while the tanks softened up the enemy. We received the order to go forward. I was the squad leader of the 57 Recoilless Rifle Unit, which included a gunner, assistant gunner, and two ammunition bearers. When we came forward, we found some of the riflemen and some of the automatic weapons men pinned down by machine gunfire. They asked us to knock out the machine gun nest.  At the time, fear did set in. I knew it was our duty to knock out this machine gun nest. For some reason, I don't know if it was fear or panic that set in, but my gunner took off and retreated and my assistant gunner wasn't in sight. I turned to my two Korean ammunition bearers and motioned for help, as they couldn't speak English. They
helped me load the 57 Recoilless Rifle while the men who weren't pinned covered me as I stood up and fired. We did this three or four times until the enemy was silenced.  When I look back at this incident, I know it was truly by the mercy of the Almighty God that my life was spared.  As I grow older, I now know there was a reason for Him saving me. Now it is up to me to keep the legacy of Christian faith going in our family. God has a reason for each of us.  The faith of Joshua carried him to the Promised Land.  Then we too, with our faith, can have the promised land.

See you in the New Jerusalem.


"Buck. Calvin M.J.
Sergeant Calvin M J Buck, US 55037730, Infantry, US Army, a member of Company C, 5th
Regimental Combat Team, 24th Infantry Division, distinguished himself by courageous action near Y ongon-ni, Korea, on 19 October 1951. While attacking enemy positions, a group of riflemen from his company was pinned down by devastating enemy machine gun fire. With
complete disregard for his own safety, Sergeant Buck, Squad Leader of a 57mm Recoilless Rifle Team, moved into a forward and exposed position. Firing with deadly accuracy, he destroyed the enemy machine gun nest, thus enabling his comrades to secure their objective with a minimum of casualties. Sergeant Buck's courageous action, unswerving determination and selfless devotion to duty reflect the highest credit on himself and the United States Infantry. Entered military service from Goodhue, MN. "