It’s Death as W.D.s Pourhouse but its life was the Hotel Mazeppa
​
Once again fire has claimed another old building which was so much a part of its town’s heritage. No matter what memories one holds of these old structures, their destruction is like losing an old friend that you have known most of your life. Only outdone by the 1889 fire that claimed Mazeppa’s Mill and half of the same block as the hotel, and the Dec. 1975 Mazeppa Elementary School fire, the Mazeppa Hotel fire went up with just as much fury, determined to leave only the memories of its existence behind. The results could have been much worse on its effect on nearby structures had it not been for the combined effort of all the area fire departments called to the scene. Only blackened brick and rubble was left from the early morning fire with owner Jason Ferguson losing his entire business. And sadly the fire also consumed the adjoining brick building that included two apartments whose long time tenants lost all of their belongings. That building also was of historical significance as the “Bank of Mazeppa”.

Lyman Thorpe built the original hotel wood structure in 1860 along with a livery stable for hotel customer use. He named it the “Franklin House” in honor of his wife’s mother maiden name. In 1862 Thorpe enlisted in Co. G, 8th Minn. Inf. leaving the hotel to be operated by his wife and her parents until his return. Even then, as throughout its lifetime, it was a gathering place either in the parlor or on its grand porch facing the busy street to discuss the topics of the day such as the weather, the chinch bug problem on the crops, and the more distant affairs such as the Indian War in the New Ulm area, or the Civil War and its claiming the life of one of Mazeppa favorite sons at Murfreesboro, Tn. Or yet another said to be a held at the Confederate prisoner of war camp at Andersonville, Georgia. Passing ownership to Alvin Kinney in 1873 the hotel was already gaining fame as to where visitors could be assured of being welcomed with a good meal, rest, and hospitality in a progressive town. Commerce had continued to flourish especially due to the arrival of the railroad in 1876 and building of the Mazeppa Mill Company. The Minnesota Midland RR made two stops a day in Mazeppa on its journeys to and from Wabasha. Citizens of Mazeppa often had the luxury of having at least two doctors to turn to with one being located at the hotel on a once a week, or once a month visit. W.W. Mayo was known to make occasional visits to Mazeppa in assisting local physicians at handling difficult cases, staying overnight at the hotel to monitor the patient until his next day’s return to Rochester. In later years his sons Drs. Will and Charles made the same visits. One dentist from Red Wing who promoted himself as “The Painless Dentist” was a regular at the hotel on a weekly basis for those who were brave enough to see him.

The Hulda Fowler family took over proprietorship in 1885 renaming it the “Fowler House”. She and her husband George were among the earliest settlers of the Mazeppa area. Upon Georges passing, Hulda and her sons Homer, Walter, and Elmer purchased the hotel property along with additional lot space on which Homer established the Bank of Mazeppa next door to the hotel in 1887. Hulda Fowler remarried and relocating to the Minneapolis area and the sons, turning their attention to running the bank and local lumber yard, the hotel was turned over to Tom Mongan and his wife in 1887 keeping the same name Fowler House. The town continued to prosper as did the hotel. A stage line the locals called “the Bus” had been established to the Lena Station, a stop for the Chicago Great Western RR. Tom Mongan made two trips daily picking up the mail and passengers to and from Mazeppa. Although the hotel did not offer a public restaurant, Mrs. Mongan would prepare a grand meal every year on Thanksgiving and Christmas Day for her boarders and for the public for 50 cents and often entertaining her customers with her singing and dancing abilities. Salesmen, traveling musical groups and actors were frequent guests while performing plays at the Village Hall above Sullivan’s Saloon and in later years, the Opera House above Phillips Store and above Nichols Store in the Maas building. It was a thriving time on the streets of Mazeppa with many businesses and its grand centerpiece hotel. Touted as the best hotel in this part of the state, even upstaging Red Wings St. James Hotel which had closed its doors for a short time due to lack of funds.

To pursue other business interests in Mazeppa, Tom Mongan sold the hotel to William H. Anderson in 1896. Anderson, along with his brother Wesley, had already established themselves as good businessmen in the buying and selling of livestock at the Mazeppa Stock Yards and at Zumbro Falls. With a building boom taking place in Mazeppa during the next 4 years, Anderson modernized by removing the original wood structure of 1860 relocating it to another part of town in 1900. He replaced it with the same commodious building using brick and changed the name to the “Hotel Anderson”. Continuing its reputation as a first class hotel may updates were made to the heating, water, and lighting system, Anderson owned it until 1909, then selling it to Oliver Tuttle. William Anderson went on to Wabasha, Mn. purchasing the Hurd Hotel renaming it the Anderson House which gained fame in its own right.

As the Mazeppa Hotel, other owners from 1912 were George Walker, James Fones, William Cohen, Peter Seim, and George Pratt. 1927 was the beginning of a new era for the hotel. Edward and Elizabeth Gahler of Mazeppa said, “We need a place where our boys can play their music”. The Gahler’s bought the hotel from Bayfield Realty Company in Wisconsin. With 4 boys and a daughter, the ballroom of the hotel would be blessed with the sounds of brothers Gerhardt on the cornet, Edgar on the saxophone, Leonhardt [they called him “Beans”] on the Drums, Alvin at vocal, and sister Lucille on the piano. People would gather to listen and dance to the lively music in the hotel ballroom being assured of a good time at the Gahler’s Night Club. Mother Lizzie would pay local girls 25 cents a night to dance also. The hotels most joyful times were probably during the Gahler ownership from 1927 to 1960. When most dances were not held during lent you could be assured Beans, Gay, and the group were playing to a crowd in Mazeppa. The Gahler Orchestra could later be seen playing at night establishments in the Twin Cities. After 67 years, a license was issued to the Gahler’s to be able to sell liquor thus attracting more business. The American Legion Auxiliary performed skits, plays, and other fun occasions at the Night Club. For a time Lizzie operated a bakery and later Gay sold bakery goods and had a television and radio repair shop in the basement. The hotel survived a fire to the upper story in the mid 1940s but with the constant attention of Ed Gahler, the building stayed in the very best condition possible.

Ownership passed to Duane and Margaret Reding in 1960 who continued the Night Club with numerous dances and entertainment. They sold to Arnold and Louise Belverud in 1965 with John Clement taking possession a year later.

John Clement owned the building for a number of years and during that time offered ownership to others. Most had limited success. In 1978 Thomas Graham and Russell Hartzell had a short stay calling the bar “The Loading Zone.” During that time the bar gained notoriety as “Mary’s” but her involvement too was short lived. In 1986 William D. Ackerman and wife Glenda purchased the property from the late John Clement estate making much needed improvements to the appearance or the hotel entrance. Ackerman renamed his business W.Ds. Pourhouse for William Daniel, which had remained through the rest of the owners.

Other than Ackerman’s improvements, the past 50 years saw very little attention paid to the deteriorating exterior condition of the building. Only the main floor was in use and received changes and updates from time to time. The upper floors consisted of only studded walls and ageing flooring of 118 years. Roof leaks were numerous but due to the expense; the much needed repairs were not made. The building often made the owners aware of its impending doom with subtle hints such as a large section of its brick face falling to the ground last summer.

The Mazeppa Hotel has seen the town in its infancy, its growing years, its most prosperous years, and its declining years. Out her doors covered wagons with settlers, some staying, and others are moving on. Farmer’s teams with wagons hauling their produce to town to sell or trade, horse and buggies tied to the hitching posts, automobiles, and motorcycles. The same can be said of the destroyed adjoining building that spent its life as a meat market, bank, electric store, barber shop, and more.
Remember the music, the dances, the good times, maybe a few bad times, friends you made, the friends you lost, the owners, the bartenders, the card games, and the meals served. Stand and look at the now pile of blackened brick and allow your memories to fill the empty space. 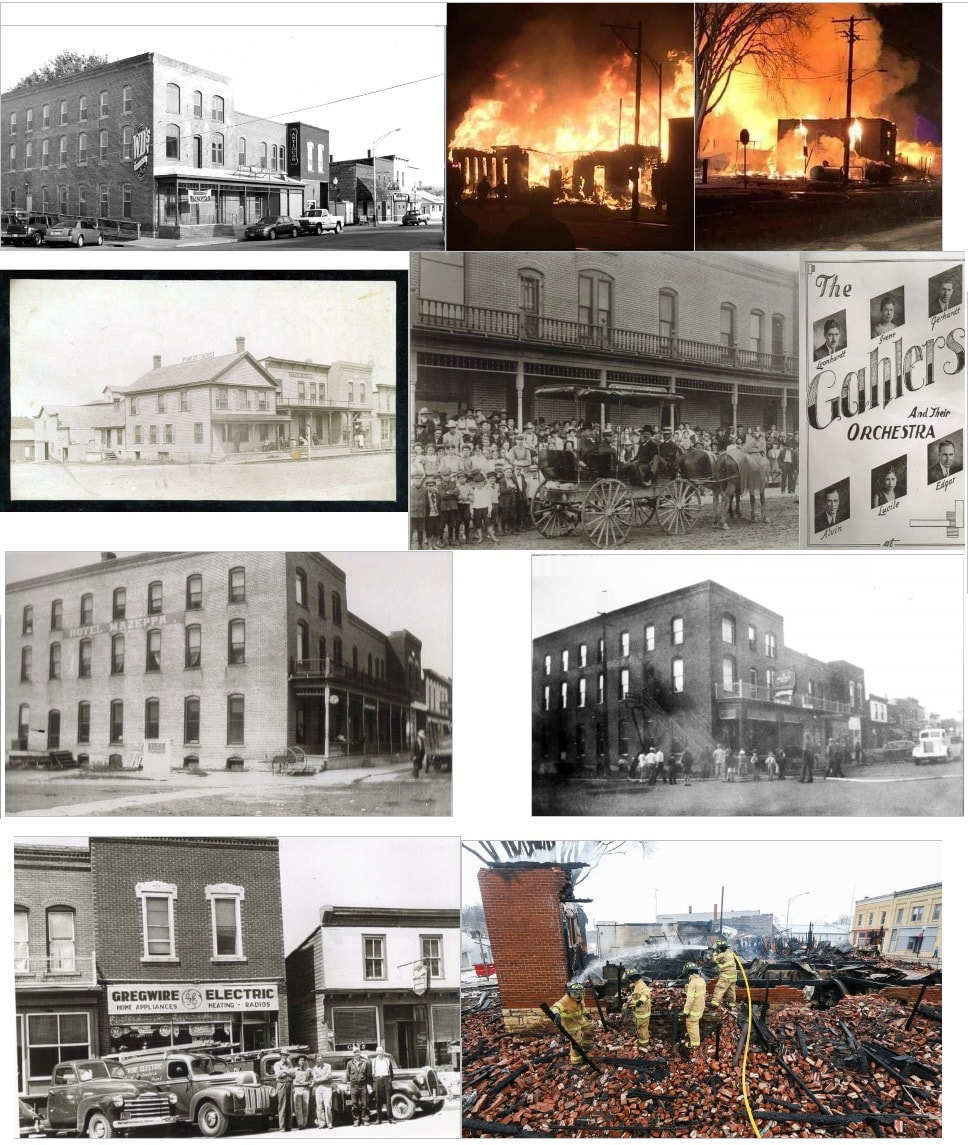 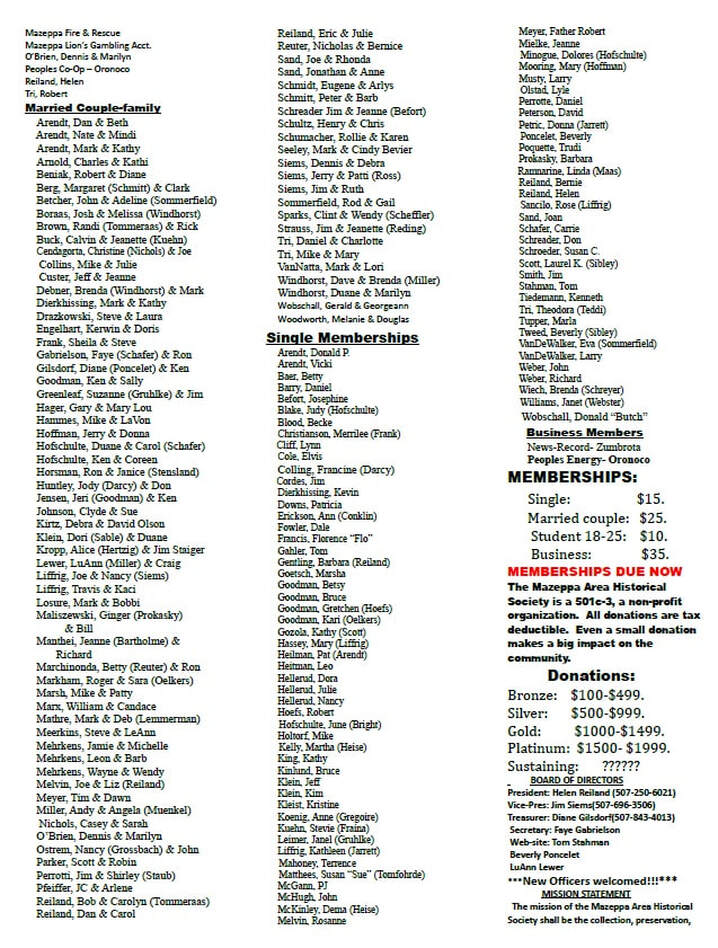 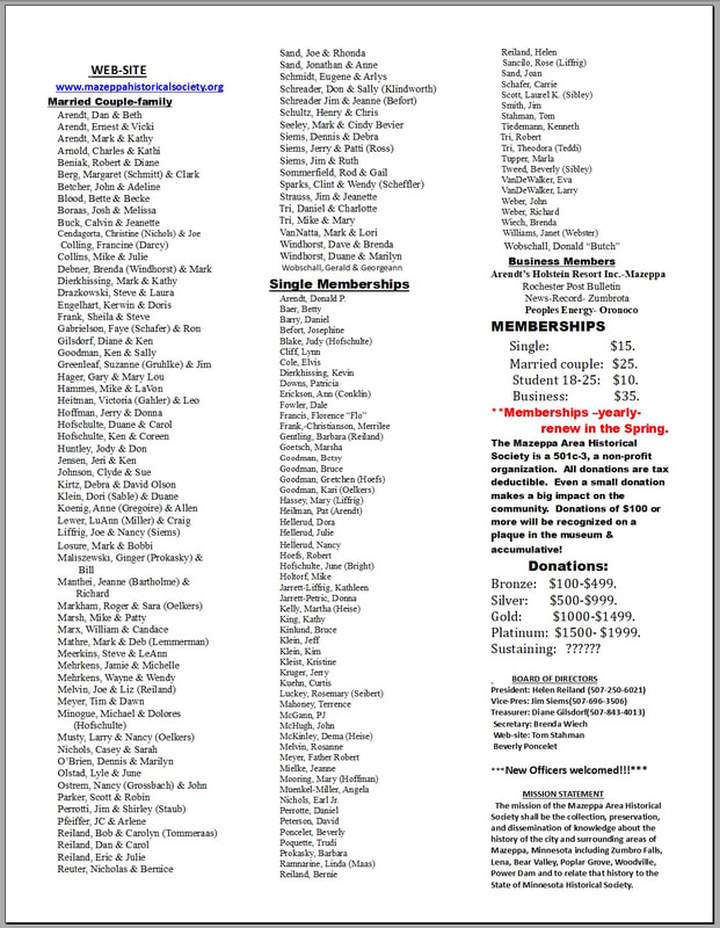